Expand your diagnosis, measure more patients with the XL probe. On obese patients, biopsy is often difficult to recommend and fibrosis blood markers may be inefficient. (XL + is the third generation version of the XL probe.)

Echosens extends the limits of the existing FibroScan® 502 to obese patients with the new XL probe* which:

Today, the global epidemic of overweight and obesity – “globesity1” – is becoming a major public health problem in many parts of the world.

More than 1.1 billion people are estimated to be overweight worldwide. Around 320 millions of them are now considered as obese.

The increasing prevalence of overweight and obesity is associated  with many diet-related chronic diseases including:
• Diabetes
• Cardiovascular diseases
• Hypertension
• Some cancers

Until now, as reported in several studies, the performance of FibroScan® 502 was limited in overweight people (from and above 25-28kg/m²)2 resulting in a difficult even impossible examination of these patients.

Indeed, measurements with FibroScan® may fail on obese patients for several reasons.

Because of the fat and connective tissue thickness:

• Shear wave does not propagate properly though the liver and ultrasound signals are attenuated and aberrated: No or few signals leads to no result

The XL Probe is a complete software, hardware and training package of innovation & optimization which includes:

Warnings:
• User shall hold the probe perpendicular to the probe/skin (XL Probe does not improve perpendicularity)
• Using the XL Probe on patients with a SCD < 2.5 cm will lead to false results (biased estimation)
• FibroScan® examination will be difficult on patients known as being difficult to examine with an ultrasound scanner
• Examination on obese patients can be difficult and longer even with the XL probe
• Operators must take time to perform an examination

Expand your diagnosis with our new specific product for a better clinical assessment.

Before each liver stiffness examination, for optimal performances of the XL Probe, Echosens recommends  performing a localization of the liver and assessing the Skin Capsula Distance (SCD).

The SCD is the key parameter because liver stiffness measurements start at a fixed depth depending on the probe type chosen. SCD represents the distance between the point of application on the skin of the transducer and the hepatic capsula. This parameter is not readily available from patients, so Echosens provides an ultrasound scanner.

The XL Probe must be used for patient morphology:

The TP is generally correlates to thoracic subcutaneous thickness. It can therefore be used as a substitute criterion if Skin Capsula Distance is not available and if the thoracic perimeter exceeds 110 cm.

Even though BMI indicates if someone is obese, it is not a reliable criterion for the use of the XL probe because it is not indicative of the fat localization. For example, the XL probe makes possible measuring patients with a BMI of 60 if the SCD is less than 35mm.

Benefits of the XL Probe

For the physician, it’s a unique opportunity to:

For obese patients, it’s a way to :

New FibroScan® probe for obese patients : a pilot of feasability and performances 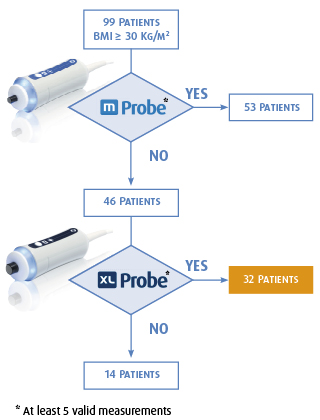 • Measure patients with both M and XL probes 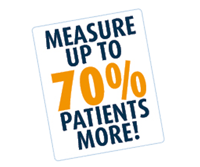 Out of the 46 patients not measured with the M probe* :

The latest Fibroscan, the 630 Expert is coming soon. The new device offers all of the same diagnostic features of the previous models with many valuable enhancements. The new device…

NEW: FIBROVIEW SOFTWARE Available for ALL FibroScan Users! FibroView is a software dedicated to the presentation of FibroScan Exams and building medical reports. Designed to run on Windows and MAC…

FibroMeter is a range of blood tests for evaluating the stage of liver fibrosis and cirrhosis. Each FibroMeter test has been specifically designed for the main specific etiologies, using determined…

The latest Fibroscan 430 Mini is now available in Canada. The new device offers all of the same diagnostic features of the previous models with many valuable enhancements. The Fibroscan…

What do the experts say about FibroScan?